Truth be told, there isn’t much in Mitchell County, Iowa, bearing the Garland name.

A modest apartment complex on the south side of Osage, the county seat, is called “Garland Housing” or some such. The building where Hamlin reputedly lived briefly while attending Cedar Valley Seminary was razed earlier this fall. Most recently, it had served as a private residence, and it certainly could have been a boarding house in the late 1800s. There’s a plaque designating the Garland Homestead several miles northeast of Osage, where the family lived during most of their Mitchell County years (1870-1881), a house built by Richard, Hamlin’s father.

And for several decades, there has been the Hamlin Garland Wildlife Area, one mile north of St. Ansgar, twelve miles northwest of where the Garland family lived. The property has no direct connection with the Garlands or their Mitchell County years. The name simply honors our prominent native son. The 114-acre site is owned and maintained by the Mitchell County Conservation Board. Its primary feature is a marsh… and the entire property is magnificent!

North Iowa does not have Grand Canyon glory, but that doesn’t mean there aren’t occasional glimpses of nature’s beauty. Conservation staff members have planted turnips on a small strip of land to feed the deer population. In addition to the marsh, there’s a small woodlot. On the Friday after Thanksgiving, a ramble through the site was a wonderful way to work off SOME of the prior-day feast! During the hour my wife and I were there, we had the property all to ourselves.

A dozen years ago, at the conclusion of a day of providing local high school students an overview of Garland and his significance, I was approached by a young man who asked if I could help him identify an appropriate Garland quote for the sign at the Wildlife Area as part of his Eagle Scout project. I sent him 3 or 4 options and he chose a few lines from the ending of “Boy Life on the Prairie.” Below are a few pictures of the wildlife area.

Let me know if and when you want a tour… 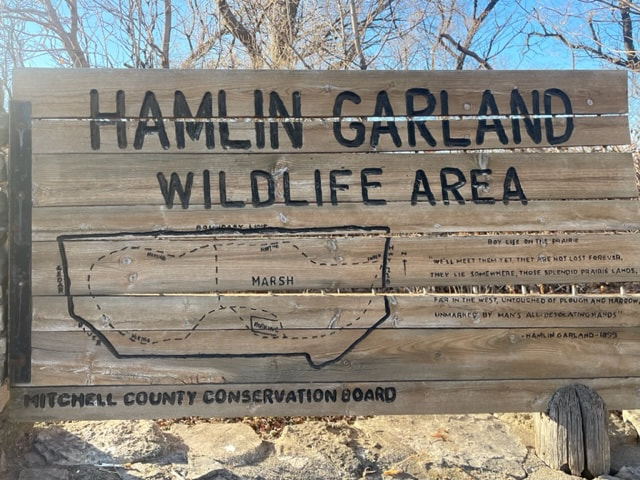 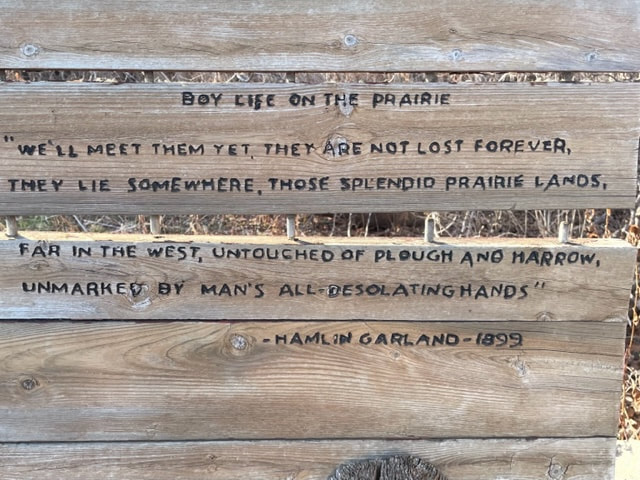 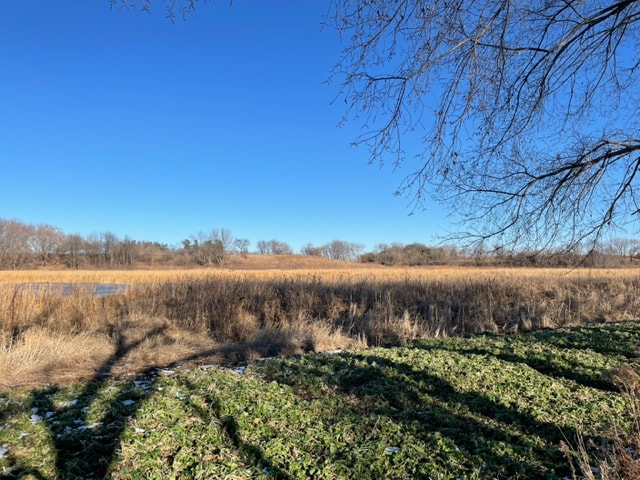 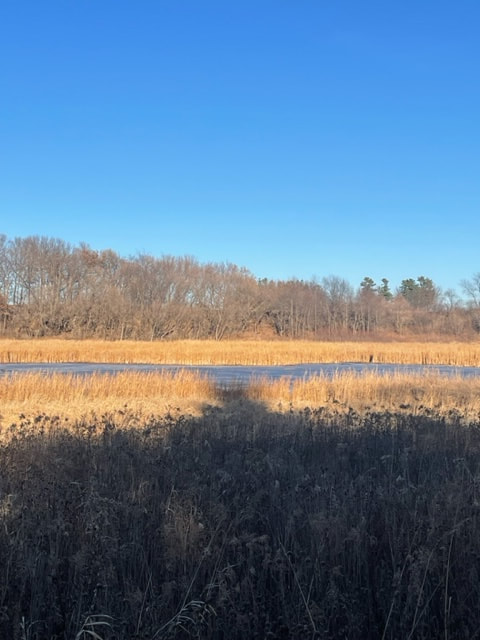 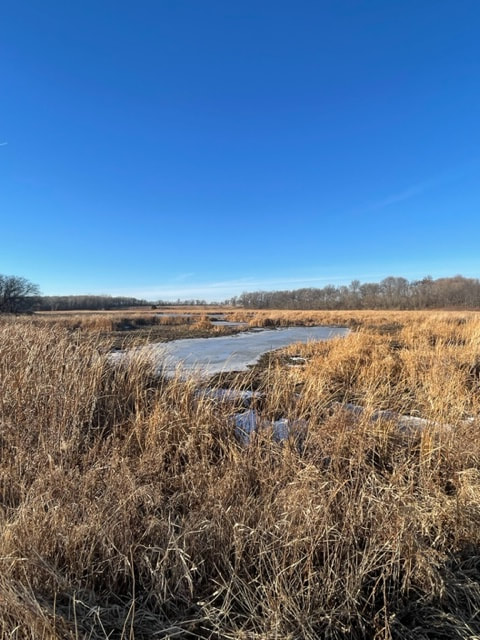 ​Hamlin Garland's Granddaughter Passes Away
Victoria (Vicki) Brighid Doyle-Jones, May 27, 1945 – October 29, 2022
“The apple doesn’t fall far from the tree,” was a truism in the life of Victoria, “Vicki”’, Doyle-Jones. From her CPA father, Vicki inherited organizational and business skills; from her artist, Hollywood-connected, mother, who grew up in the swirl of early twentieth century literary figures, Vicki assumed art talent and the love of social gatherings; and her grandfather, author Hamlin Garland, passed on innate abilities at writing, editing, and the clear use of language. We don’t know where from where she found her passion for animals, natural science, and education, but Vicki was a woman of many gifts and interests, and she shared them, and herself, generously with others with every ounce of her being, always. To read the full obituary follow this link.
​ 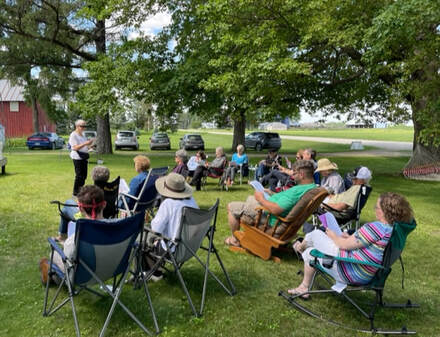 For thirteen years, people living near Hamlin Garland’s boyhood home in North Iowa have gathered in June to read and hear, in Garland’s words, “chants rhymed and unrhymed,” an event hosted by the Mitchell County Historic Preservation Association. For most of these years, the works featured focused on Garland’s nature writing--the wind, the trees, the wildlife, etc.-- which the author recalled from his Mitchell County years.

This year, however, the range was expanded to reveal more of the variety and versatility of Garland’s verses. This difference is reflected in the title of the event. In previous years, the gathering has been entitled “Nurtured by Nature." This year’s reading, held outdoors on Sunday afternoon, June 26, was under the banner of “Garland Lines, New and Old."

The event included some poems set locally, primarily from “Prairie Songs,” and others, drawn extensively from “The Trail of the Goldseeker." Most poems had a rhyming pattern; several selections were free verse, rather uncommon in the 1890s when they were written. For the last eight years, the event setting has been the Garland family homestead, 3907 Noble Avenue, northeast of Osage, Iowa, where Hamlin’s family lived throughout his teenage years.

​Kurt Meyer prepared a program with the poems that is attached. 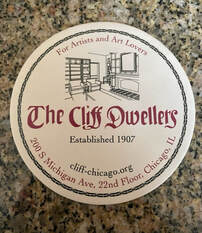 In  Showing Up, Column 94, Kurt Meyer discusses membership in The Cliff Dwellers and the book that he selected for one of their discussions:
"In 1901, Fuller published “Under the Skylights,” three short stories set in Chicago, the centerpiece being “The Downfall of Abner Joyce”. Let there be no doubt: this 140-page roman à clef (French: “novel with a key”) is a brutal takedown of Hamlin Garland, then a blustery, unvarnished “force of nature,” fresh off the farm. By the story’s ending, however, Abner is becoming civilized into Chicago society, growth encouraged by the cultured woman he falls for – and ultimately marries – Medora Giles (in real life, Zulime Taft)." See Showing Up, Column 94 for the full account. 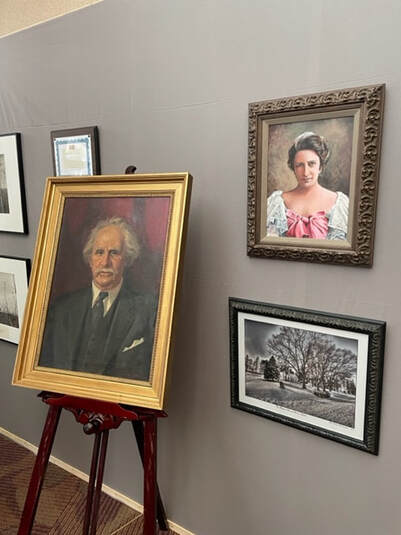 My Garland story today is really the story of how this magnificent portrait ended up in Osage. It all started maybe a quarter of a century ago, when I became convinced and more than a bit frustrated that a Hamlin Garland’s Mitchell County years were being overlooked by scholars, historians, and authors… those who really should know better....
​
I reached out to my friend Denis Boerjan, who I have known for more than 50 years, who is on the board here, and asked about potential interest on the part of the Historical Society. This is how Keith Martin, Sr’s extraordinary portrait of Hamlin Garland ended up HERE. Martin Senior’s son, Keith Martin, Junior, had taken it upon himself to find “good, more appropriate homes” for certain objects in his parents’ estate. This Garland portrait is one such example.

To read Kurt Meyer's full remarks on the unveiling of the Garland portrait, follow this link to "The Hamlin Garland Story: Remarks presented at the Opening of 'Hamlin Garland Revisited'" 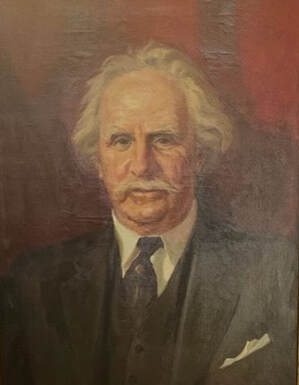 Hamlin Garland is returning to Mitchell County. For Kurt Meyer, president of the Hamlin Garland Society, it is an early Christmas present. According to a press release, the Mitchell County Historical Society will unveil a newly-acquired portrait of the Pulitzer Prize-winning author during a special gathering on Sunday, Nov. 21. It will be held at the MCHS museum, which is housed at the Cedar River Complex in Osage. A few months ago, Meyer did not even know the portrait existed. In 1937, distinguished artist Keith Martin Sr. painted Garland while he lived in Hollywood. Recently, Keith Martin Jr. decided he should find the portrait’s home. The son of the artist reached out to Meyer and the Hamlin Garland Society, which is a national organization with an online presence.

To read the full article, follow this link to "Hamlin Garland Returning to Mitchell County." 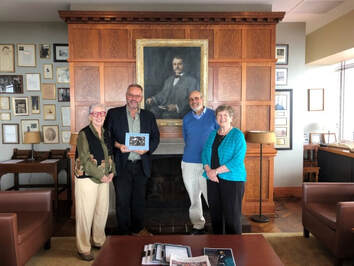 Kurt Meyer (holding the book), the President of the Hamlin Garland Society, paid a recent visit to the Cliff Dwellers Club. He met with Club President Carla Funk (on the right), Club Vice-President Joan Pantsios (on the left), and me, the Club Secretary (between Kurt and Carla). A portrait of Garland is behind us. Hamlin Garland was a prominent American literary figure in the first three decades of the 20th Century. He won the Pulitzer Prize in 1922 for the biography, A Daughter of the Middle Border. He was one of the charter members of the Cliff Dwellers, and the Club’s first President. An outcome of Kurt’s visit was an agreement to start planning programs at the Cliff Dwellers on the works and life of Garland in partnership with the Hamlin Garland Society.
"Nurtured by Nature": Poetry Reading at the Garland Homestead, Osage, Mitchell County, Iowa
On June 20, 2021, the Mitchell County Historic Preservation Society hosted a poetry reading at the Garland homestead in rural Osage, Mitchell County, Iowa.  Outdoors in lawn chairs, the reading featured poems that Garland wrote about his Midwestern background. The annual event takes place at the home site, where the Garland family  lived in the 1870s. Kurt Meyer prepared a program with poems that is attached as a PDF.
Hamlin Garland and the Homestead Act of 1862
On June 13, 2021, the Homestead National Historic Park in Beatrice, Nebraska hosted a panel discussion that focused on authors who lived through and wrote about the homesteading experience. Panel members represented six authors: Phoebe May Hopper, Bess Streeter Aldrich, Willa Cather, Mari Sandoz, Laura Ingalls Wilder, and Hamlin Garland. Kurt Meyer discussed Garland's experiences. and a version of Kurt's presentation is attached.