Who is Hamlin Garland? 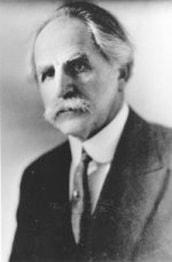 Most people remember Hamlin Garland today chiefly for his innovative collection of short stories, Main-Travelled Roads (1891), and his memoir A Son of the Middle Border (1917). But during the eighty years of his life (1860-1940) Hamlin Garland was intimately involved with the major literary, social, and artistic movements in American culture. Pulitzer prize-winning author of over 40 books, campaigner for more humane treatment of native Americans, proponent of impressionism in art, unabashed advocate of literary and cultural elitism, dabbler in research on psychic phenomena: the range of Garland's interests extended to nearly all aspects of American society.

Hamlin Garland was born in West Salem, Wisconsin, on 14 September 1860.  After moving with his family to a succession of homesteads in Iowa and South Dakota, he went to Boston in 1884, determined to embark on a literary career.  His first success was Main-Travelled Roads, a collection of short stories published in 1891.  He moved to Chicago in 1893, lectured widely on literary topics, and agitated for a realistic American literature through a number of essays, some of which were revised into his 1894 manifesto, Crumbling Idols.  In 1895 he published Rose of Dutcher's Coolly, a novel of a New Woman in which he sought to embody his literary creed.  That year he began visiting the American West, making notes of cowboys and the glorious mountain scenery so unlike his native Wisconsin.  He also began to study the American Indian, taking copious notes for later use in fiction. A number of his Indian stories were collected in The Book of the American Indian (1923).

He received a commission in 1896 from Samuel S. McClure to write a biography of Ulysses S. Grant which, after two years of exhaustive research, was serialized in McClure's Magazine before appearing in book form in 1898.  That year he followed the Klondike gold rush in search of adventure and literary material; from that trek emergedThe Trail of the Gold Seekers, a "record in prose and verse" of his experience.  In 1899 he married Zulime Taft, the sister of the sculptor Laredo Taft.  Over the next 15 years he published a series of romances of the mountain west, the most successful of which was The Captain of the Gray-Horse Troop (1902), a novel of cattlemen and Indian conflict.  In 1915 he moved to New York City to be closer to his publishers and literary life.  In the mid-teens Garland was wearying of publishing fiction and turned to reminiscing about his early life.  The result was A Son of the Middle Border, an autobiography-cum-history of westward expansion, which appeared serially before being brought out in book form in 1917, to nearly universal acclaim.  Its success prompted a sequel, A Daughter of the Middle Border, which was awarded the Pulitzer Prize for biography in 1922.  Two more volumes of his family history followed:  Trail-Makers of the Middle Border (1926) and Back-Trailers from the Middle Border (1928).  Garland had discovered his niche as a memoirist and cranked out 4 more volumes of his literary reminiscences, based on his daily diary: Roadside Meetings (1930), Companions on the Trail (1931), My Friendly Contemporaries(1932), and Afternoon Neighbors (1934).

In 1929 Garland moved to Hollywood, California, where he spent his final years in a renewed interest in psychic phenomena, an enthusiasm of his early years in Boston.  In Forty Years of Psychic Research (1936) he traced the history of his life-long interest.  His last book, The Mystery of the Buried Crosses (1939), is a record of his efforts to verify the legitimacy of a medium who, at the direction of spirits, led him to mysteriously-buried objects.   On March 4, 1940, at age 79, after a life filled with successes and tempered with disappointments, having received many honors and a distinguished place in American literature, Hamlin Garland died.
Hamlin Garland Photo Gallery
Follow this link to a collection of Garland photographs​, assembled, and in some case taken, by Keith Newlin.
Hamlin Garland Videos
Early in 1937 film maker Guy D. Haselton made a silent, black and white biographical film of Garland in his Hollywood home. The film exists in three states: a 625 foot version, including stills of his books; a 400 foot version, without the stills; and a 1964 reedit of the film with-sound-on-film narration, entitled "Hamlin Garland, Historian of the Midwest."
Hamlin Garland as Lecturer
In addition to being a novelist, short-story writer, poet, essayist, and memoirist, Garland lectured widely on American literature and writers for over 40 years.  Below are links to his lecture circulars, which describe both his background and the subjects of his lectures. **Errors of fact have been corrected in these lecture flyer reproductions. Lecture circulars courtesy of Hamlin Garland Papers, University of Southern California
Garland Biographies on the Web
Biography Written by Keith Newlin