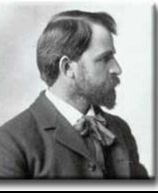 Senior Garland
Hamlin Garland had a deep and lasting appreciation for music that was an integral part of his life.  His parents loved to sing, and all seven of his aunts and uncles (of his mother's family, the McClintocks) were accomplished musicians.  His daughters remember Garland with a song on his lips (his favorites were Scots and Irish ballads), and at one time the homestead in West Salem boasted three pianos.  Garland registered his interest in song by referring to song and music and its influence upon him in each of the four volumes of his autobiography, the "Middle Border" books, and he entitled his first collection of poems Prairie Songs (1893).  As Whitman used the image of grass as the organizing principle of Leaves of Grass, Garland describes in his poems the sound and music of the prairie of his youth, filtered through a nostalgic recollection.  He would doubtless be gratified to learn that composers continue to find his poetry inspiration for song. To learn more about Garland's interest in song, see Ray B. Browne, " 'Popular' and Folk Songs: Unifying Force in Garland's Autobiographical Works."  Southern Folklore Quarterly 25.3 (1961): 153-66.  Rpt. in Critical Essays on Hamlin Garland.  Ed. James Nagel.  Boston: G. K. Hall, 1982.  258-69.

Do You Fear the Wind?
Do You Fear the Wind?" was first published in McClure's magazine in April 1899 and reprinted in The Trail of the Gold-Seekers (1899).  The linked version was arranged by Leland Sateren and performed by the Naperville Men's Glee Club at the New York Choral Festival in Lincoln Center's Alice Tully Hall in 2000.

A Cornfield in July and The River
For medium voice and wind ensemble (twenty-five performers). The linked version features Robert Maher, baritone. Steven Eldridge, piano. Music by William Penn; based on the poetry and writings of Hamlin Garland. Cleveland, Ohio: Ludwig Music, 1995.

The Grocer
Song 2 of Songs of Madness and Sorrow. Music: by Daron Hagen. Premiered by Paul Sperry, tenor. Text: by Hamlin Garland from the author's "A Day's Pleasure," Main Traveled Roads.
Songs Introduced by Keith Newlin