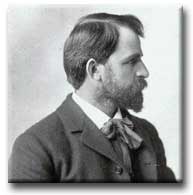 Throughout his career Garland never deviated from his advocacy of "local color" as a distinctive feature of the fiction he admired in the 1880s and 1890s. Simply put, "local color" is an attempt to reproduce facts of immediate present, the texture of life which writer has experienced, with a focus on American life of a given locale in an effort to foster a distinctively American literature through the depiction of a region's characters, customs, and textures of life. Or, as Garland put it in an essay entitled "Local Color in Art," published in Crumbling Idols (1894), a collection of his essays about American literature:
Local color . . . means that the writer spontaneously reflects the life which goes on around him. It is natural and unrestrained art. (CI 52)
Local color in a novel means that it has such quality of texture and background that it could not have been written in any other place or by any one less than a native. (CI 53)Garland distinguishes between local color that is added on from that which comes from the writer's experience: "local color must not be put in for the sake of local color. It must go in, it will go in, because the writer naturally carries it with him half unconsciously, or conscious only of its significance, its interest to him" (CI 54). So Garland's perspective is, like that of many realists, that one writes of what one knows.
In "Literary Prophecy," another essay collected in Crumbling Idols, Garland notes that
The realist or veritist is really an optimist, a dreamer. He sees life in terms of what it might be, as well as in terms of what is; but he writes of what is, and, at his best, suggests what is to be, by contrast. He aims to be perfectly truthful of his relation to life, but there is a tone, a color, which comes unconsciously into his utterance, like the sobbing stir of the muted violins beneath the frank, clear song of the clarinet. . . . (CI 43)

One of Garland's contributions (although some would call it a minor contribution) to the development of late nineteenth-century literary theory was his coinage of the term "veritism" to describe his method of composing fiction. For Garland, veritism was a form of realism that blended the realist's insistence upon verisimilitude of detail with the impressionist's tendency to paint objects as they appear to his individual eye. The veritist differed from the realist, Garland claimed, in his insistence upon the centrality of the artist's individual vision: the artist should paint life as he sees it (and not try to paint it as it should be or as it seems to others). Garland's most succinct definition of the term appeared as follows: "My own conception is that realism (or veritism) is the truthful statement of an individual impression corrected by reference to the fact" ("Productive Conditions of American Literature," Forum 27 [Aug. 1894]: 690.) Near the end of his life, Garland offered another, more extended definition of "veritism."
And he explained in an 1893 letter to the Chicago journalist Eugene Field that
The veritist does not "write up things as they are," but of things as he sees them: which is the whole width of art and the world from the position ascribed to him. (qtd. in Pizer, Early Work 126)So, the distinction between veritism (or impressionism or local color) and realism, as Garland defines it, is that while the realist attempts to depict things as they are (photographic, as contemporary critics derided), Garland infuses the vision of the individual artist into the work.
In practice, there really isn't that much difference: the methods of the realist are those of the local colorist, with one notable exception: