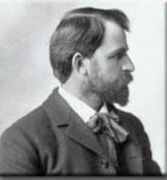 Senior Garland
​About the Garland Video

Early in 1937 film maker Guy D. Haselton made a silent, black and white biographical film of Garland in his Hollywood home. The film exists in three states: a 625 foot version, including stills of his books; a 400 foot version, without the stills; and a 1964 reedit of the film with-sound-on-film narration, entitled "Hamlin Garland, Historian of the Midwest."

Garland had mounted a traveling exhibit of his works in 1936, at first called "Hamlin Garland and His Literary Friends," and later, as "The Makers of American Literature," designed to showcase Garland's central role in the formation of American Literature. When the film was completed, prints of it accompanied the exhibit as it went on tour to at least eleven libraries, among them the state libraries of California, Iowa, Ohio, and Wisconsin, as well as to university libraries in Indiana, Chicago, and Ohio.

Click on the following two links to view the Garland videos: